I am in love with the trends this spring.  Mini skirts.  Stripes. Sequins.  Best way to wear it in my book?  All in one!

END_OF_DOCUMENT_TOKEN_TO_BE_REPLACED

I have 4 nieces and 2 nephews, and rarely do I find that they remember what toy or trinket I bought them.  So a few years ago I started to do “birthday” adventures with the kids.  We had a pool party, we’ve been to the circus, and the children’s museum among other things.  This year my oldest niece turned 10, and I wanted share with her confidence, fun, and being yourself! And so the adventure begins!

I asked my niece to pick a friend that she would like to bring on her adventure.  They were each given a party bag with 4 labeled envelopes.  They were only allowed to open 1 at a time!

Let’s be honest, when you’re having a good hair day, you feel like you can conquer the world!  So I took the ladies to a family friend who is a hair stylist and she curled and styled their hair! 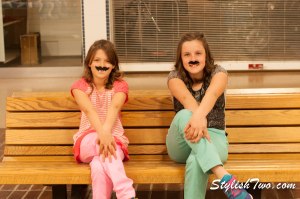 The rules for the outfit – each girl was given $10 to pick an outfit for the other at Goodwill.  They were supposed to wear whatever the other one picked for the rest of the night.  Confidence is about owning what you’re wearing.  If you carry yourself with confidence, others will see you as stylish!  The girls had a great time picking out outfits for each other and then S and I.  They tried on a million thing (as they said) and vetoed a ton – but they had fun, and that was the whole point. (check out S and I below, i’m totally rocking the lime green, orange stripe, sequins top look!) 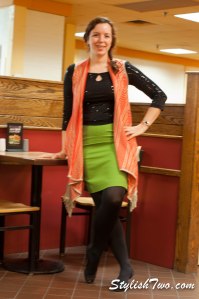 Then we did a photoshoot in their outfits! Something to always remember this moment. A moment, captured in time.  They will remember this adventure, and now they have a photo to reminisce with years later! Doing a photo shoot with kids should always be fun! So we added mustaches and captured their fun outfits at the same time! 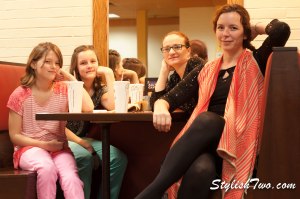 It’s not just about doing a photo shoot in your crazy outfit.  It’s about going out in public and showing people you are confident!  So we ended our night with dinner, because we were hungry, and because it was a display that we are confident and independent women!

So I apologize for not getting our blog post up on Thursday – but we were doing something special and I wanted to tell you all about it!

Until next week! xoxo ~ Em

Going out for groceries? Look your best! Here is our take on 2015 street style complete with booties, bandana, and ripped jeans.  We are easing into fall here in Maine, getting ready for some cooler temperatures to come our way. Out are the shorts and the short skirts, and in are the T’s and jeans! 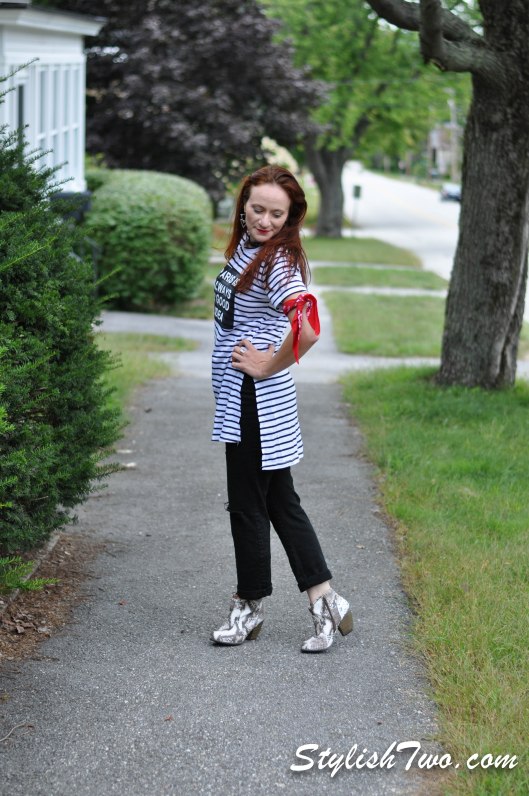 Pair your long shirt or long vest with a classy bandana (popular trend for 2015). Also popular right now is the split side tee. S bought this one on Amazon, sometimes it’s great to get something popular for a great deal! Click HERE for the link if you just have to have one like hers! 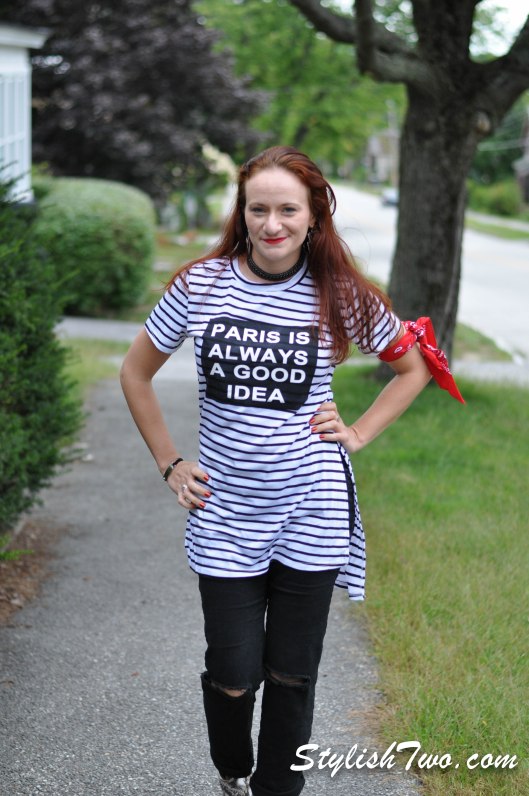 S is shown wearing her bandana tied to her arm, but it’s also popular around your wrist, your hair, around your waist, or around your neck! So break out that bandana and accessorize! And because S loves a good bargain, she just bought a pair of black jeans and DIY’ed them to fit into the current trend for ripped knees!

And it’s fall, so pull out those booties! Popular again this fall are ankle booties, and well, we here at Stylish_Two can’t just go with plain booties! We love this look with the faux snakeskin pattern paired with the stripes and a solid colored black jean.

So the next time you think about just popping out for groceries or errands in your “house clothes” throw on some red lipstick (S is pictured wearing Certainly Red, by Revlon), change out your shoes for a snappy pair of booties, tie on your bandana, and show everyone that is pays to look your best! 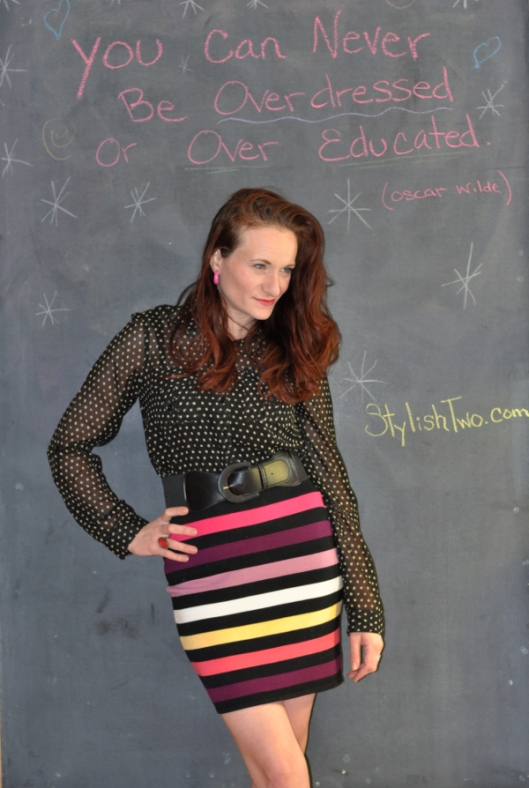